This award was established by Lincoln Community Foundation as a gift to the community.  The Charity Award will provide an opportunity to recognize individuals for their leadership and philanthropy to our great city. 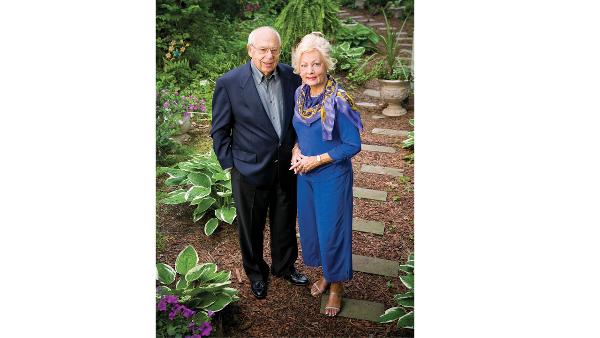 An understated, wooden sign with a simple statement hung in Duane Acklie’s office at Crete Carrier Corporation. It read, “Always Be A Country Boy.” A personal statement that speaks to the Midwestern values of hard work and humility.

Duane and Phyllis Acklie purchased Crete Carrier in 1971 and two years later moved its headquarters to Lincoln. Today Crete Carrier is one of the nation's largest privately-owned trucking companies, and the Acklies’ business and philanthropic investments reverberate throughout Lincoln and across the state. Theirs is a legacy of giving back to the community that surrounds them.

It is because of this longstanding legacy that Duane and Phyllis have been named the 2020 Charity Award recipients. Duane was recognized posthumously when Phyllis received this distinguished award at LCF's annual Donor Recognition event.

“The Charity Award is a gift to the community,” said Barbara Bartle, president of Lincoln Community Foundation. “This award provides an opportunity for all of us to recognize the Acklies for their incredible vision and leadership.”

From business to politics, faith to philanthropy, Duane and Phyllis have been servant leaders and pillars of the community for decades. Duane and Phyllis both grew up on farms in Madison County, Nebraska, their fathers both in banking. Their marriage was built on a foundation of shared values learned in hardworking communities. The Acklies returned to Nebraska after Duane’s military service in Germany as an Army Officer in Counterintelligence. They built their family home on Woods Boulevard and settled into life in Lincoln with their three daughters Dodie, Laura and Holly.

By 1966 Duane was an attorney specializing in transportation law before the trucking industry was deregulated. He helped Ken Norton incorporate Crete Carrier and suggested the name for the company. They began with six leased trailers and one customer, ALPO Dog Food.

In 1971 Duane represented Norton in a potential sale of the company. When the deal fell through, Duane turned to Phyllis and said, “What do you think about buying a trucking company?” Today the company is a transporter of virtually any product and operates more than 5,000 tractors and 13,000 trailers throughout the continental United States.

Duane and Phyllis’ charitable contributions have sent ripples of good throughout Lincoln for decades. Education has been a continuing philanthropic passion. Duane was an alumnus of the University of Nebraska, earning both bachelor’s and law degrees from the University of Nebraska, and later earned an honorary doctorate in law from Nebraska Wesleyan University. The Acklies left an immeasurable impact on both institutions.

While continuously investing in student internships and job opportunities through Crete Carrier, the Acklies further demonstrated their commitment to higher education through significant contributions to University of Nebraska building projects at the College of Law and the College of Business. The Acklie Charitable Foundation was the leading contributor to the Duane W. Acklie Hall of Science at Nebraska Wesleyan.

In 2018, the Acklie Charitable Foundation joined Nelnet and Union Bank & Trust in providing funding to the Learn to Dream Scholarship at Southeast Community College. Established in 2007 by Nelnet and Union Bank & Trust, this scholarship provides economically disadvantaged students the opportunity to complete up to two years of credit hours at one of SCC’s campuses in Beatrice, Lincoln and Milford, without paying tuition and fees.

The Acklies have also been committed to the collective health of our community. Duane and Phyllis both served on the Board of Trustees for Bryan Health. More recently, Bryan renamed the main inpatient care tower at its East Campus Acklie Tower in recognition of a gift from the Acklie Charitable Foundation.

The Acklie Charitable Foundation is a founding benefactor of the Fred & Pamela Buffett Cancer Center and made a generous gift toward construction of the Lincoln Division of the UNMC College of Nursing. They have also made several smaller donations for different cancer-related projects at UNMC/Nebraska Medicine. Duane and Phyllis were honored with the UNMC Chancellor's Distinguished Service Award in 2014.

Both Duane and Phyllis have given their time and vision to countless organizations throughout Nebraska. The impact of their leadership and family values have been recognized by many including The Aksarben Foundation. Granddaughter Halley Acklie Ostergard Kruse was crowned Aksarben Queen in 2007 alongside Dr. Tom Osborne as King.  Kruse joined Crete Carrier in 2018 and serves as Vice President and general counsel for the Acklie Charitable Foundation.

Duane and Phyllis Acklie knew the importance of being involved and giving back. They considered their community in the holistic sense and spread this love and kindness to many.

“We are pleased to honor Duane and Phyllis for their countless contributions to our quality of life in Lincoln and throughout the state,” said Bartle. “Their family legacy of whole-hearted generosity will impact the community for many generations to come.”