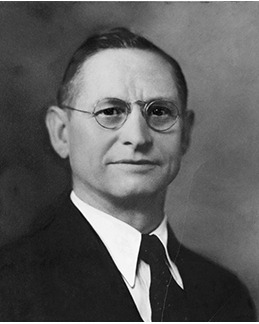 NARRATIVE:
When Peter was four years old, his mother, three brothers and two sisters emigrated to the United States from Czechoslovakia. During their passage, their life savings was stolen. Their father was able to emigrate later but shortly afterward, he was killed in a job-related accident. The boys all started to work very early in order to support the family. During Peter's later years at the Cedar Rapids planning mill, he designed and machine-carved the scrolls that embellished the doorways of the first post office in Lincoln. The post office was dismantled after Peter moved to Lincoln and he was delighted to be able to purchase one of the doorways. He used it for the doorway of his grocery store which was later remodeled into the Marguerite Hac Music Studio.