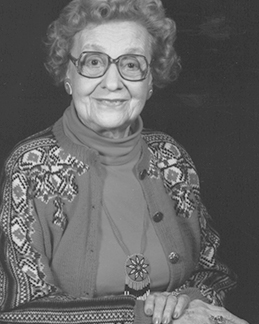 NARRATIVE:
Marguerite taught piano for more than 50 years. She also developed one of the very earliest preschools and she formed and conducted a unique rhythm and melody band composed of children ages 2-10. The band started in October of 1935 with 8 children who gathered in Marguerite's studio to make music and grew to over 100 children. They gave concerts annually and also played in churches, hospitals, and schools. Funds raised in concerts such as the one given for the Women's Club of the Temple Theater in 1939 and in conjunction with the Convention of the Nebraska Music Teachers' Association in 1941 were donated to charity. Many students who have made music their career have said, "Miss Hac, it all started here." Marguerite emphasized duo piano with her students. One of the pianos in her studio was a very fine Steinway which she purchased form the Palladian Literacy Society when it disbanded. Marguerite and Herbert Schmidt selected the piano for the organization at UNL. It was designated for eventual return to the Music Department at UNL. Marguerite also established scholarships in piano at the University of Nebraska.