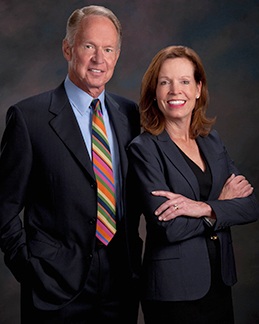 QUOTE:
The Lincoln Community Foundation is an organizational cornerstone that has helped to move Lincoln into its current status as one of the nation's best places to live. When such a positive team of donors works together, great things will continue to happen.

CAREER HIGHLIGHTS:
Margaret A. (Meg) Merchant Lauerman earned a bachelors degree in Broadcast Journalism from the University of Nebraska-Lincoln and worked in the newsroom of KOLN-TV as a student intern and as a full-time writer/producer. She earned a masters degree from Michigan State University in telecommunications in 1975, and returned to Nebraska to work as a director, producer and senior producer at Nebraska ETV from 1975-1986. During that time she also taught courses in broadcasting at UNL as a visiting assistant professor. She served as communications director for Lincoln Public Schools from 1986-1993, as communications director for the Nebraska Math and Science Initiative under a National Science Foundation grant in 1993, and as a district public affairs specialist at State Farm in 1994 and 1995. She returned to UNL to teach full time as an assistant professor of Advertising in 1996, and earned a Ph.D. in 2000. She was named director of university communications for UNL in 2001 and has served in that capacity since then.

Meg was named Professional of the Year by the Nebraska Chapter of the Public Relations Society of America. She has served on the boards of the Lincoln Community Foundation, Humanities Nebraska, PRSA Nebraska, Leadership Lincoln, and Lincoln Ad Federation, and has been a part of many United Way committee initiatives. In 1999 she was a Rotary Group Study Exchange team to Brazil. She has served as moderator (congregational leader) for First-Plymouth Church and on many boards and committees, including Trustees, Women's Ministries and Outreach.