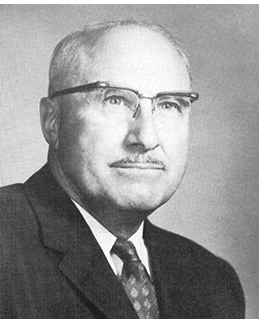 NARRATIVE:
Leander M. Kalin was born in Steinauer, Nebraska. He attended the University of Nebraska School of Agriculture and later was engaged in the beverage business for 40 years, serving as director on a national board of wholesalers for 27 years. For 15 years and until Leander's death, was a member of the Coproration Board of the Catholic Diocese of southern Nebraska assisting to plan and caryr out the drive for the Cathedral of Lincoln, the Chancery Office and Marian Center as well as the development of Bishop Heights. He donated the Kalin Tower at the Marian Center.