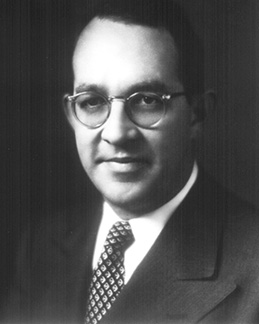 NARRATIVE:
George Ward Holyoke was born on January 19, 1913 in Madrid, Nebraska. George was a man who loved a great many things in life, but none so much as people. He spent 40 years of his life in Lincoln, most of them as partner in the investment firm Ellis & Holyoke. He took deep pleasure in the trust his clients gave him to keep their futures safe. When people spoke of him, the first thing they mentioned was his sense of humor. He was funny because he was wise, kind, observant, and good with language.

George's pleasures were those of daily life: reading to his children at night (Tanglewood Tales was his favorite), cooking steaks on the grill, playing golf or cards with his many friends, lying on the floor in front of the stereo listening to Schubert. His taste in books extended from Will Cuppy and Pogo to Nabokov and Bellow, the anthropologist Loren Eiseley was closest to his heart. His idea of heaven was the Lake Fork of the Gunnison and a fry pan with a nine-inch trout.

George's grandfather and the man he was named after, George Ward Holdrege, was the general manager of Burlington Lines West. He helped lay the railroad lines out west, which was powerful in early Nebraska politics and the settlement of western Nebraska.