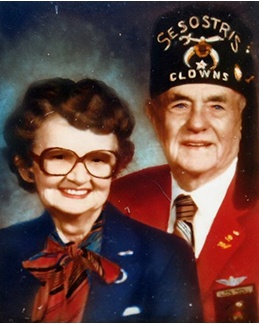 NARRATIVE:
Earl became interested in flying in the early 1940's. He joined the Civil Air Patrol in Fairbury and went on active duty to fly coastal patrol in 1941 in California. He was stationed at Montgomery Field in San Diego, CA, to hunt submarines. He was then transferred to a P-51 Fighter Interceptor Group in Burbank, CA. The then Major Hawks was discharged as a Squadron Commander of Wing 763-3S of the Patrol. Upon returning to Nebraska, he bought his first airplane, a Piper Cub J-3 in 1947. A hangar and landing strip were built across the road from the Hawks home and the Hawks Field was born.

Earl's other great love was being a clown. A slight stroke in 1963 forced him into semi-retirement. Upon the suggestion of a friend, Earl joined the Clown Unit of the Shrine Sesostris Temple where "Sunshine the Clown" was born. He devoted a great deal of time to Sunshine by performing in nursing homes, hospitals, schools, churches, civic clubs and Shrine circuses and parades. Earl's wife, Pauline, joined him as "Moonbeam the Clown."