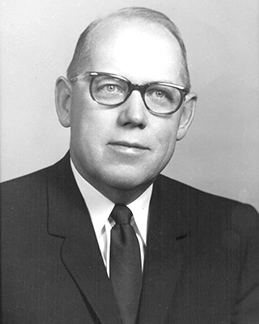 NARRATIVE:
Vance was one of the top 100 influential Nebraskans during his lifetime. He arrived in Lincoln in 1953 to serve as pastor of Trinity United Methodist Church and became president of Nebraska Wesleyan University in 1957 and through his work, enabled the school to build a new campus center, library, dormitories, Olin Science Hall, Smith Curtis Administration building, Rogers Center for Fine Arts and the Elder theater. In all of the positions Vance held, he was always serving others and making a contribution to the great state of Nebraska.  His wife Barbara wrote: "Vance gave back because of his strong faith in God and His teachings, his great love of people, and his desire to be of service when needed."