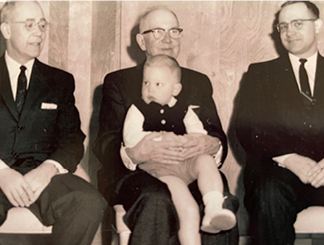 John Thomas McGreer, Sr. went by "Jack." When Jack was young, he started working at Beatrice Creamery Company as an egg candler, and worked his way to manager. The company changed names many times. The family referred to the company as Meadow Gold. The joke was we could only buy Meadow Gold dairy products. Even though it was a joke, it was unspoken to not patronize competing brands. Jack moved around in order to continue his career at Beatrice Foods. Born in Nebraska, but had moves to Chicago, St. Louis, and Denver, with time in Lincoln in between.