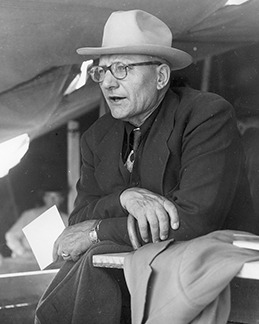 NARRATIVE:
In 1906, Colonel Arthur Weimer Thompson started crying farm sales and auctions in York County. Eventually he sold purebred swine, lambs and cattle at the principal venues such as the Chicago International Stock Show, The Denver Stock Show, the Kansas City American Royal, the San Francisco Cow Palace and the National Ram Show in Salt Lake City, Utah. In later years he specialized in Black Angus and Hereford cattle and eventually, from 1943 until his retirement n 1953, in Herefords exclusively.

Col. Thompson's impact on the live stock industry went beyond the sales arena. As an advocate of modern methods in animal husbandry, he worked closely with the University of Nebraska College of Agriculture (now Institute of Agriculture and Natural Resources) to spread his message. He used the proof of his sales record, his knowldge of livestock values and the pulpit of the auctioneer to urge constantly and convincingly farmers, ranchers and purebred cattleman to upgrade the quality of their livestock. He encouraged and influenced the annual 4-H sales at the Nebraska State Fair. He 'cried' the first Ak-Sar-Ben 4-H sale and did so, again for no fee, for many years thereafter.

In 1950, Time magazine wrote about ' ... brisk, blue-eyed 'Colonel' Arthur Weimer Thompson, dean of U.S. cattle auctioneers ... Thompson has probably done more than anyone else to make Herefords the highest-priced cattle breed. In the last 42 years, Auctioneer Thompson has knocked down $250 million worth of cattle at more than 7,000 sales all over the U.S.  His record $506,000 for a single day's selling set at the auction of Colorado Rancher Dan Thorton's Hereford herd in 1947, still stands ... as does the $65,000 bid at which he sold the prize bull Baca Duke II last year. Only eight Hereford bulls have ever been sold for more than $50,000. Colonel Thompson has auctioned them all ...'

In 1947, Colonel Thompson and his wife established the Arthur W. and Viola Thompson Scholarship at the University of Nebraska. It is given to outstanding second semester sophomore or junior Animal Science majors.