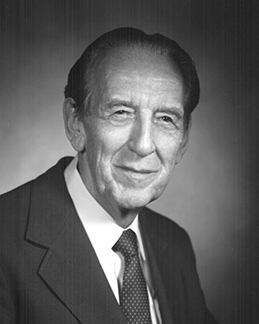 QUOTE FROM DAUGHTER:
It was second nature for Bertrand to serve. He did not know how to say "No."  He enjoyed people and the opportunity to better his community.
NARRATIVE:
At the time when it was not a popular stance, Bert was on a lifelong search for scientific trusts. It was his mission to show how science and religion went hand-in-hand and were not in opposition. He published over 200 scientific articles and monographs, many of them jointly with colleagues representing different interdisciplinary fields. He studied in 60 different countries and assembled a tremendous amount of data on the changing environment of the world and the migrations and extinctions of animals and plants. Bertrand was recognized internationally as an authority in the fields of paleontology, geology, water resources, ecology and early man.