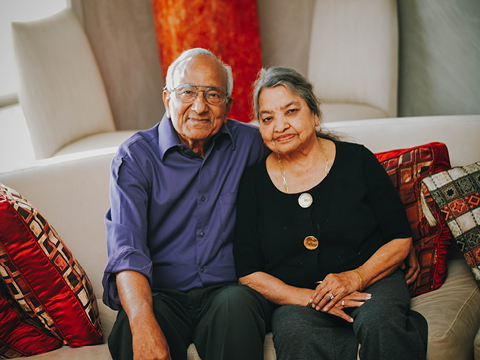 As they celebrate the golden anniversary of their arrival in Lincoln (following a few years in Lawrence, Kansas) as a young couple from India with three small children, Mahendra and Prem Bansal determined to honor their family legacy of generosity with a heartfelt gift to the Lincoln Community Foundation.

“Giving back to the community was part of our growing up, our faith, our family values,” Mahendra explained. “Our parents told us that you should always give whatever you have. The amount doesn’t matter, it is only important to give. Like our parents, we believe in leaving the world a better place than we found it.”

The principle of philanthropy was cultivated on both sides of their families. Prem’s parents gave to orphanages, while Mahendra’s family donated their land in India to create a school that eventually transformed into a college. “When people were looking for jobs, they would regularly come to our home in Delhi and stay with us,” Mahendra said. “A person never went hungry when they were in our house.”

Preeta Bansal, their youngest daughter and an LCF board member, reflected on this philosophy of care that shaped her family. “My parents come from a culture where family is everything, and community is family. They both were born into large families at a time when community and family were the primary source for safety nets, so extended family members looked after one another. And villagers and community members were all considered part of the extended family.”

To honor that family tradition of giving, and as part of a larger community charitable giving strategy, the Bansals created a charitable gift annuity at the Foundation, which offers a lifetime income for Mahendra and Prem now while providing future support for the community. As a result of this gift, they are new members of the Foundation’s Legacy Society, honoring donors who arrange now for a gift at the end of life. “This is about giving back to Lincoln, a place we love,” Prem said. “Lincoln is our home. We want to pass on the blessings this community has bestowed upon us.”

The Bansals grew up in India, married and had three children, but both wanted to further their education. Mahendra came to America first to earn his doctorate in Kansas. Prem and the children followed soon after, and a job opportunity for Mahendra brought them to Lincoln. It has been a wondrous journey. Mahendra became a registered professional engineer with a Ph.D. in civil engineering, and he led the Data Bank for the Nebraska State Natural Resources Commission for decades. Prem has a Ph.D. in public administration and was the first Indian American woman to serve in a professional role in the Nebraska statehouse.

Throughout her tenure as a public servant, Prem worked with five Nebraska governors over three decades as senior aide, policy researcher, policy advisor and division head.

• Ameeta Martin was in second grade when they arrived in Nebraska. She’s now a pediatric cardiologist in Lincoln.
• Jay became a cornea and refractive eye surgeon and lives as an entrepreneur in California.
• Preeta graduated from Harvard Law School and has spent more than 30 years in senior roles in government, global business and corporate law, including positions at the White House and U.S. Supreme Court. She recently returned to make Lincoln her home.

“Now that I’m back here in Lincoln and get to see them up close and personal, I am amazed how active my parents remain, socially and civically,” Preeta said, noting a dizzying landscape of hands-on community service that includes Heartland Big Brothers and Sisters, Matt Talbot Kitchen, Cedars Home for Children, Friends of Foreign Students, Downtown Rotary, the Hindu Temple and the Faith Coalition of Lancaster County.

Granddaughter Alyssa Martin, a policy aide for Lincoln Mayor Leirion Gaylor-Baird and also a Harvard Law School graduate, agrees. “My grandparents infused in all of us a love for service to others and for seeing past surface differences, to honor unity as well as the unique humanity and spark of the divine in each person,” she said.

The Bansals are thankful for their blessings. “We believe in demonstrating gratitude and making a fair contribution. It is so easy to procrastinate, so we wanted to do something now,” Prem said. “Our fifty-year anniversary in Lincoln seemed like the right time to say thank you to a community that has been very good to us. Our hearts belong to Lincoln.”

Leave Your Mark on the Future

When Mahendra and Prem Bansal decided it was time to do something now to create a future charitable legacy, they turned to the Lincoln Community Foundation. The Bansals met with Paula Metcalf to brainstorm about how best to structure a future gift, and after considerable discussion they elected to create a charitable gift annuity as an initial step in their community giving plans.

Members of the Foundation’s Legacy Society make the ultimate and honored gift by including the community alongside family in the distribution of their assets through a will or trust, via beneficiary designation on a retirement account or insurance policy, or by creating a charitable gift annuity.

Mahendra and Prem were drawn to the Lincoln Community Foundation because it is a trusted organization, centered on community causes.

Their advice to Lincoln citizens: make your plans now. “Please do not put off your giving,” said Prem. “As we grow older, it becomes even more important to give back to our community.”

To learn more about how to create a charitable legacy, contact Tracy Edgerton at 402-474-2345 or tracye@lcf.org.